Ancient Near Eastern Archaeology is dealing with the study of the material remains of human culture from the beginning of sedentary life in the early Neolithic (ca. 10’000 BCE) until the conquest of large parts of the Near East by Alexander the Great (330 BCE).

The core region of Ancient Near Eastern Archaeology is Mesopotamia, the land between the two rivers Euphrates in the West and Tigris in the East. There, one of the first complex societies in world history developed (Sumer). Later Mesopotamia became the core region of great empires, such as those of the Akkadians, Assyrians and Babylonians. 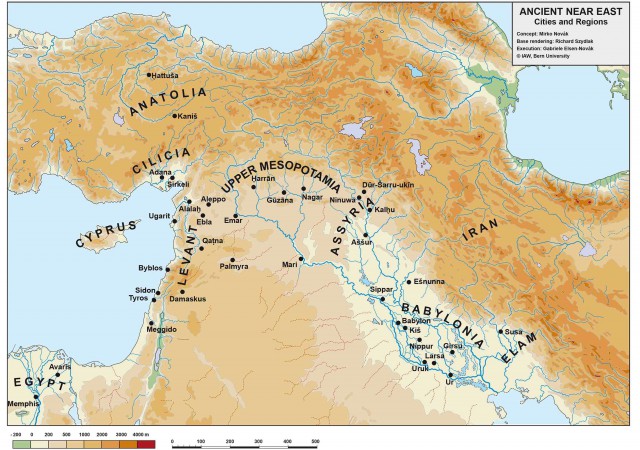 This area was, since the Neolithic, dynamically interconnected and shared a variable set of cultural traits. Furthermore, the lowland regions were in permanent contact with the neighboring highlands of Anatolia (eastern Turkey) and western Iran as well as with the Arabian Peninsula and, at times, with the Indus valley, which lead to cultural exchange on many different levels.

Therefore, in order to understand cultural processes in Mesopotamia one has also to look at the whole Near East and beyond.

Archaeology, in very general terms, is the study of material remains of human culture with the aim to reconstruct all aspects of human societies and their material reflections: subsistence strategies, settlement patterns, urbanism, religious concepts, afterlife believes etc. The basic material for investigation is given by all kinds of objects and contexts: pottery, stone tools, depictions, burials, architecture etc.

Nowadays, a close cooperation with natural sciences is common in archaeology to increase the possibilities for a deeper insight into human life in the past, e. g. through the chemical analysis of residues in pottery vessels or the gaining of scientific data for the dating of contexts and the establishment of an absolute chronology.

In the USA, unlike Europe, thus a division between anthropology and art history of the Ancient Near East is defined in the academic system.

The major source for gathering new information is still the archaeological excavation, although the reevaluation of already available data with the help of more advanced and elaborated methodologies becomes more and more substantial.

Objects which are deprived of their specific find context through e. g. illicit digging activities loose a huge part of their potential and can even become totally useless for archaeological research. Hence the restriction of illicit art trade became a major effort for many archaeologists nowadays.

Moreover, making the results of excavation and research accessible to the public through printed or electronic publications, museum exhibitions and lectures is one of the most important tasks of archaeologists.

The collaboration of archaeologists and philologists has proven to be very profitable. Even though the two disciplines work on different sources they both aim at furthering our knowledge of past societies. This cooperation is especially productive in the historical periods of Ancient Mesopotamia.

Scroll back to top